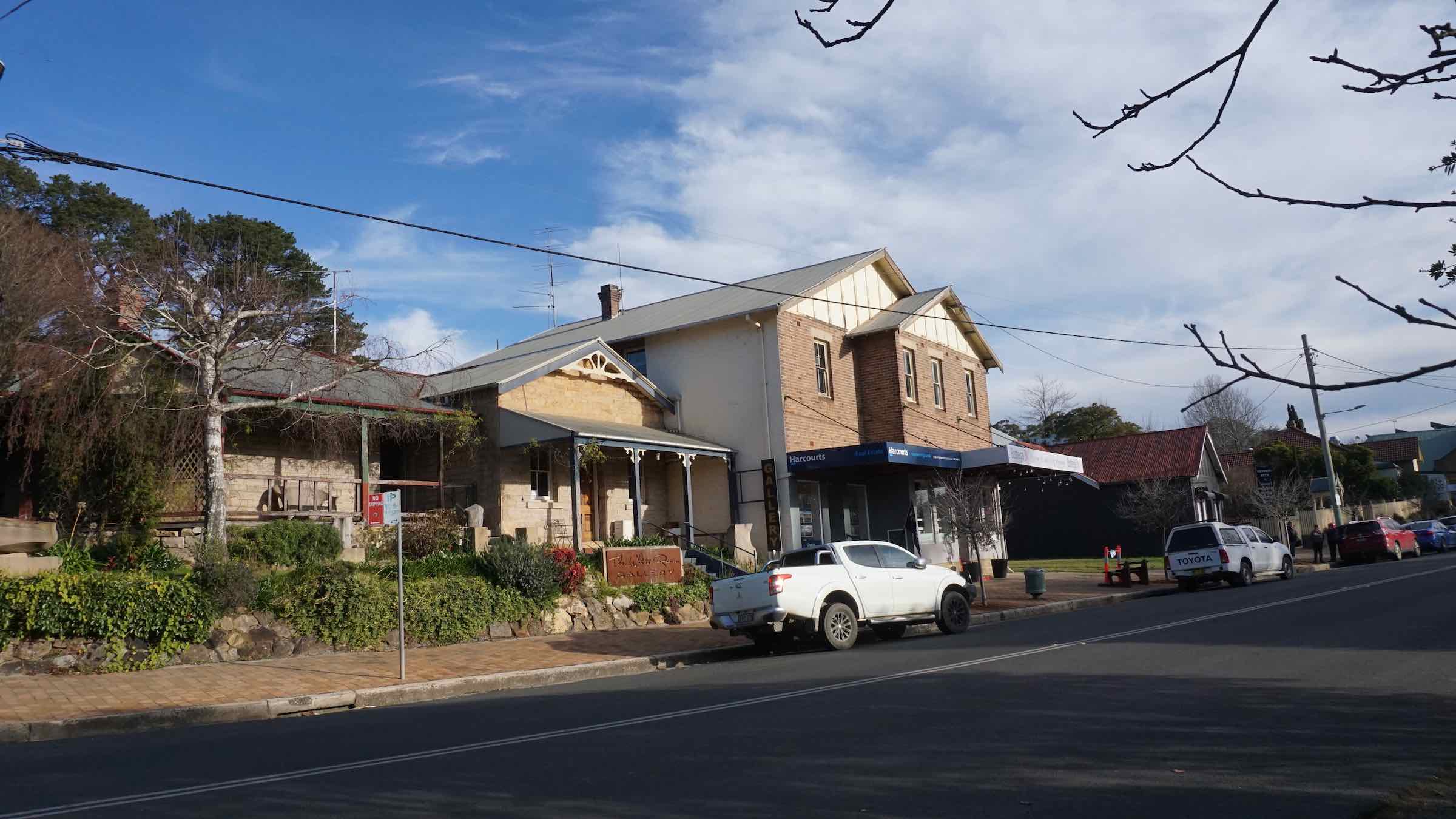 In 1904, Joseph Tooth, sawmiller of Bundanoon, purchased five lots of land in Railway Avenue from George Arthur Price.  Lot 1 was on the corner of Osborne Street.  In 1906, Joseph and his brothers constructed the sandstone building on the corner block.  From 1922 until 1927 it was operating as the Willamurra Guest House with sisters Eva and Rose Fahey in charge.  The timber premises behind the stone building were constructed by Joseph Tooth to provide more accommodation. 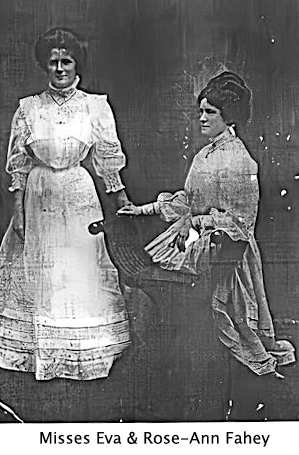 For the next five years until 1932, their married sister Florence Schell and her husband William ran the guest house. The Schells retired and by 1936 they had left Bundanoon.  The guest house was not advertised again until Mrs Annie Gillen arrived in 1937. The assistant station master was a regular boarder and during the war years Willamurra was home to many long-term boarders.

Once a famous nightspot

In 1945, Joseph Tooth died, and his property passed to his surviving children Alma Akrigg and Arthur Tooth, in 1948. Around this time, the late-night coffee shop called the ‘Jane Brown’ moved from premises on the corner of Anzac Parade and Church Street to the Willamurra premises. The ‘Jane Brown’ was being run at the time by the Morris family. Their old premises had a dance floor, and they easily adapted Willamura to allow for dancing. 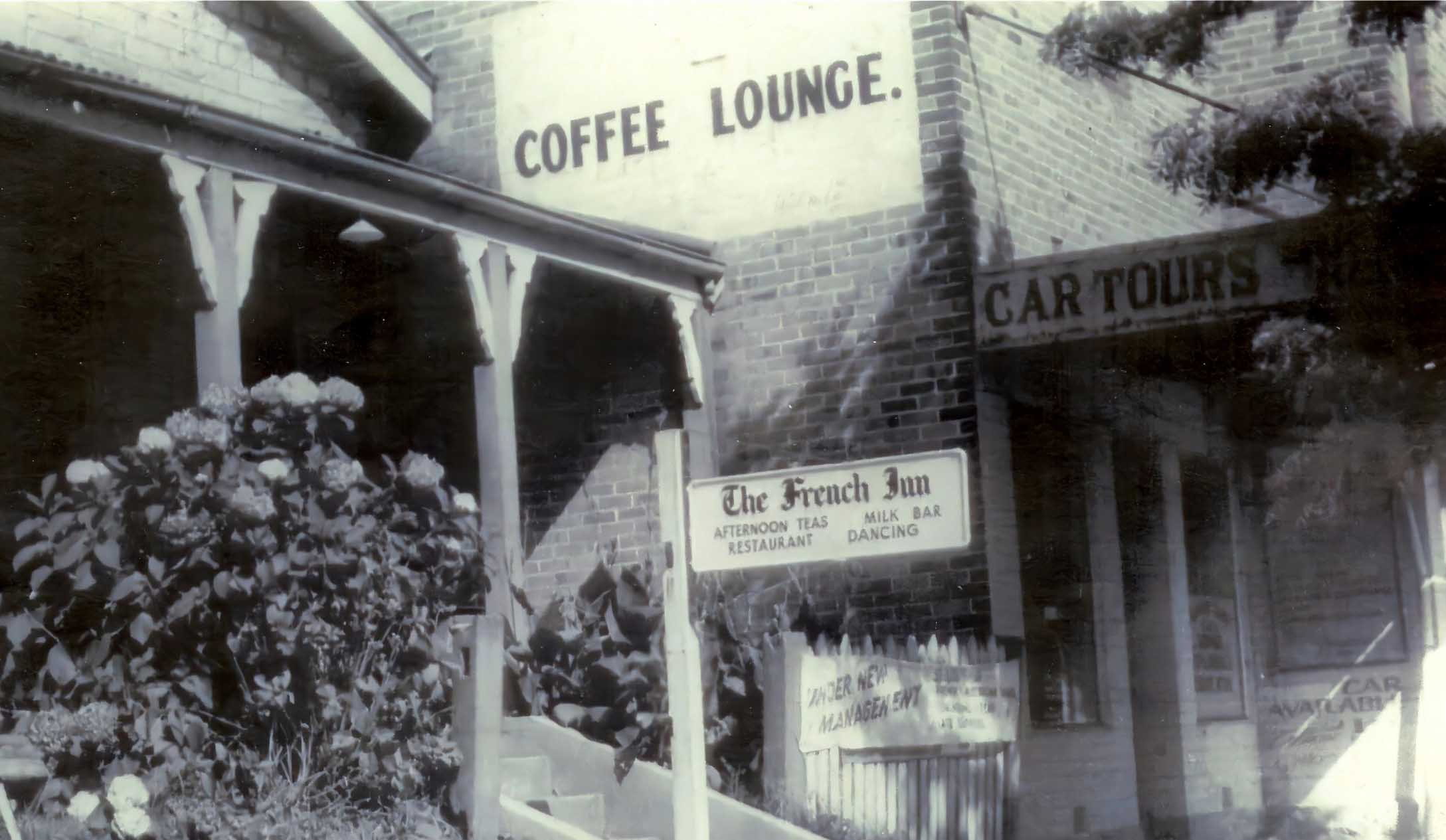 The use of the building for entertainment purposes continued in the 1950s when it was run by Frenchman Pierre Nickhaus and his wife Chez as a night-club venue. The business was called ‘The French Inn’, also known as ‘Pierre’s’, and it has been recalled that “mainly for the booming tourist trade, it would open early evening and close in the wee small hours of the morning. Music would be played for dancing the hours away; the dance room was dimly lit with exotic paintings around the walls. There was a cafe in the building where strong coffee was served, as well as meals. This lovely French couple would use the front portion of the building for their nightclub and live in the back portion.”

From nightclub to pottery

By the beginning of the 1970s, the nightclub era had passed. In 1973 Kenneth Hickling and his wife Wendy became the owners of this and other land from the Tooth estate. The premises were known as Hickling’s Flats in this period.

In 1980, the house was purchased by Wendy Smith, a potter, who ran the “Village Pump” shop at Exeter before coming to Bundanoon. Wendy constructed some pottery kilns in the rear rooms, and operated a shop selling her wares in the front room closest to the street.

In 1988 Bruce and Fiona Pryor bought the property, and enlarged the kilns. They continued to operate the shop for about six years, then consolidated the workshop and sales area to the side and rear of the stone building. 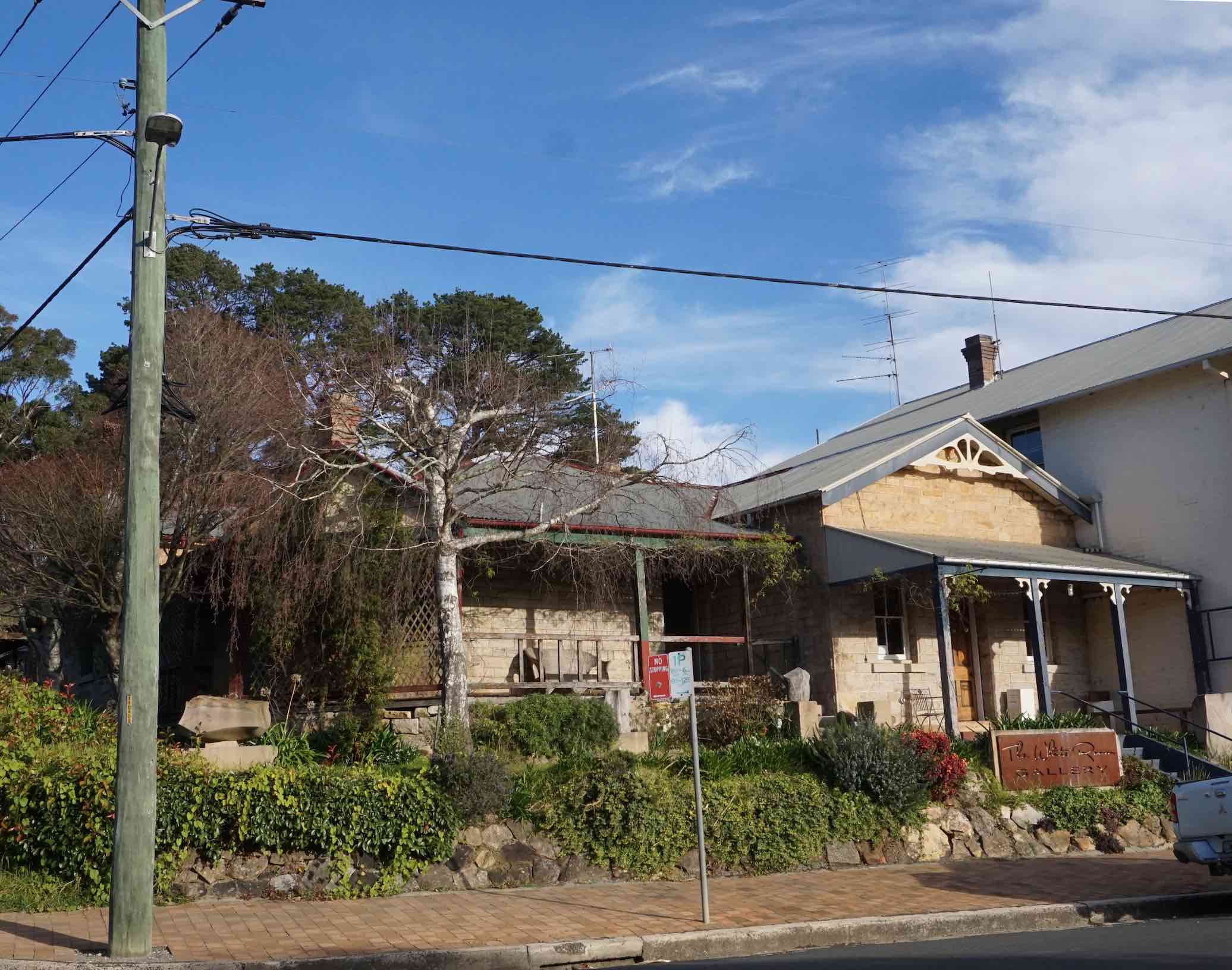 The Two-storey Building and shops next door
37 Railway Avenue 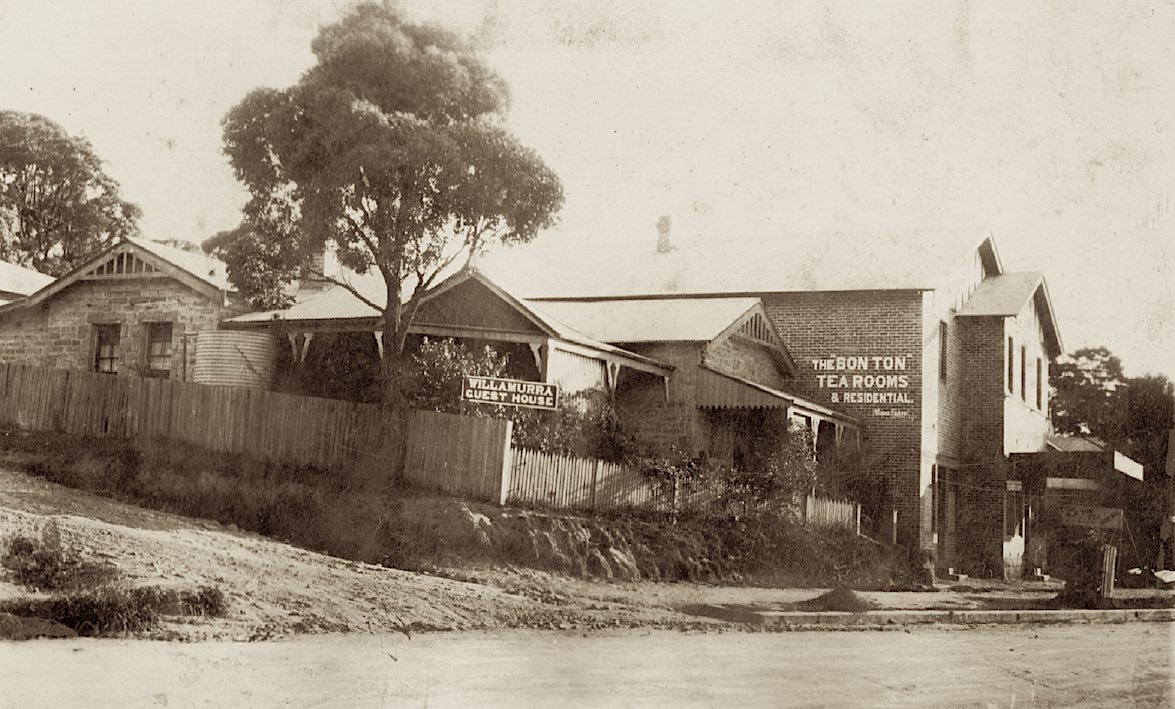 In 1926, Joseph Tooth built a two-storey brick building with shops adjoining the Willamurra guest house. The new adjacent premises were advertised as Willamurra Boarding Establishment and Bon Ton Café.  There were two shops, one large and one small. The Bon Ton Café was established by the sisters Rose and Eva Fahey. The café was one of the first uses for the larger of the two shops in the building. Eva and Rose operated the Bon Ton Café in these premises until 1935 when they relocated their café to a shop adjoining the Memorial Hall. The name ‘Bon Ton’ travelled with them to the new location.

During the 1940’s, a restaurant called McVickers occupied the two-storey site, along with a car hire and booking service. In 1944, there was a business making generators in the small shop, run by Mr. Bearman. 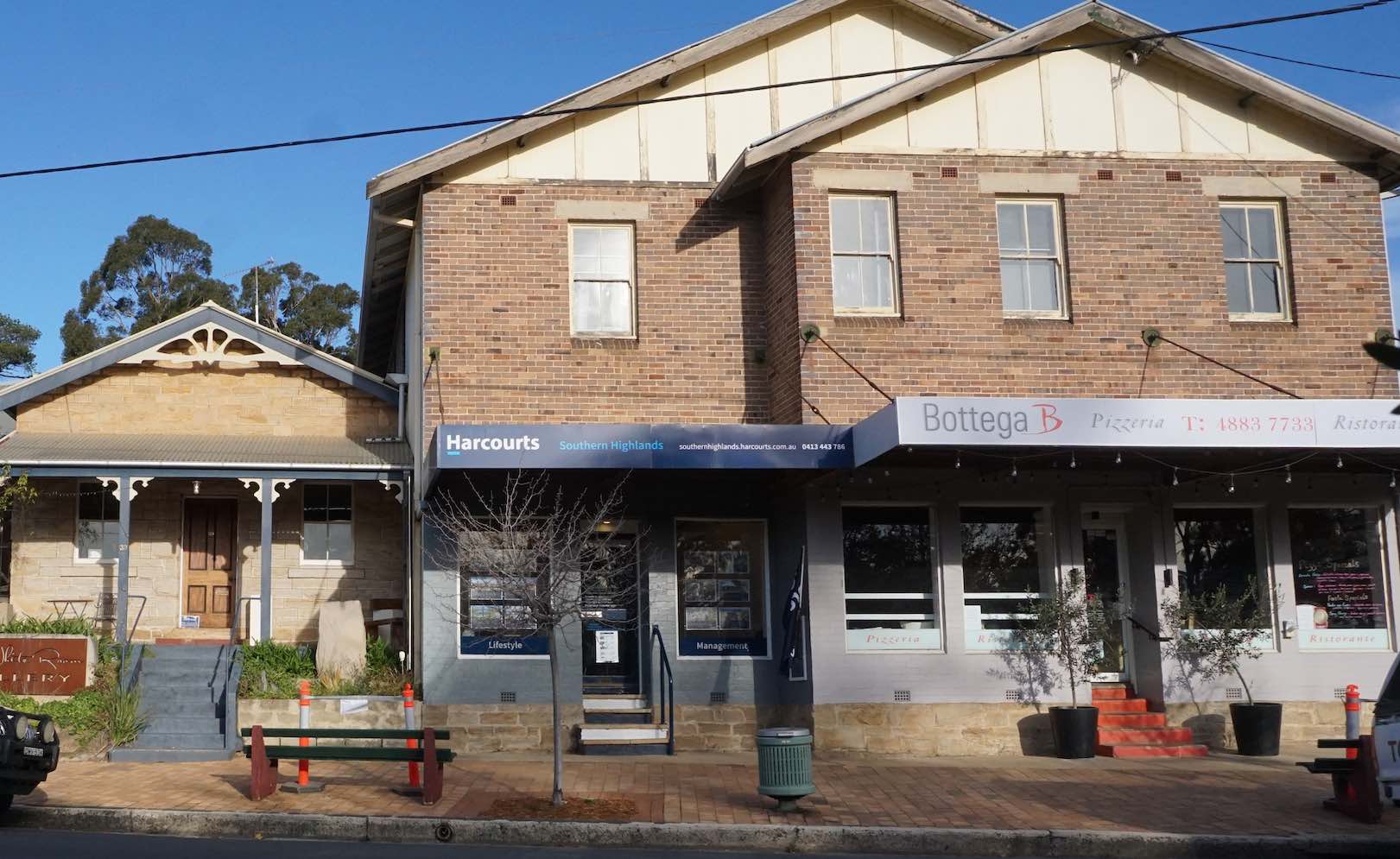 Mr Pemberton established a steam laundry in the big shop in the 1950s. This was taken over and run by Norman and Jean Grant for five years in the late 1950s.  After the steam laundry ceased to operate, the shops stood vacant for a number of years.

By the 1980s, the large shop was being used as an antique shop run by Cherie Jeffries and there was also a hardware business there run by the Olsens. The small shop was probably the last location for the Bank of NSW (Westpac) branch, before branch banking ceased in Bundanoon.

In 1997, there was a business called Marees Collection and also a hairdressing salon. The Youth Centre was there for a time. From 1999, the Bakery operated out of the large shop, and a real estate agency was in the small shop.

Around 1926-27, Joseph Tooth built these premises with a residence on the lot behind.  Early occupiers were Peter McNally and his family who moved from Bowning in 1928.  Mr and Mrs McNally were hairdressers and ran both ladies’ and gentlemen’s hair salons and also billiards and gaming facilities.  The family lived in the residence at the back. In 1939 the McNallys moved to a larger house in Hill Street but continued to run the shop. In 1949, following the death of Joseph Tooth, the McNallys purchased the premises from the estate. They continued the hairdressing and sporting facilities, but with increasing emphasis on bicycle and golf hire.

Peter’s brother, Ernie, lived at the back, and repaired bikes for hire. It has been recalled that bikes were everywhere, even hanging from the rafters. 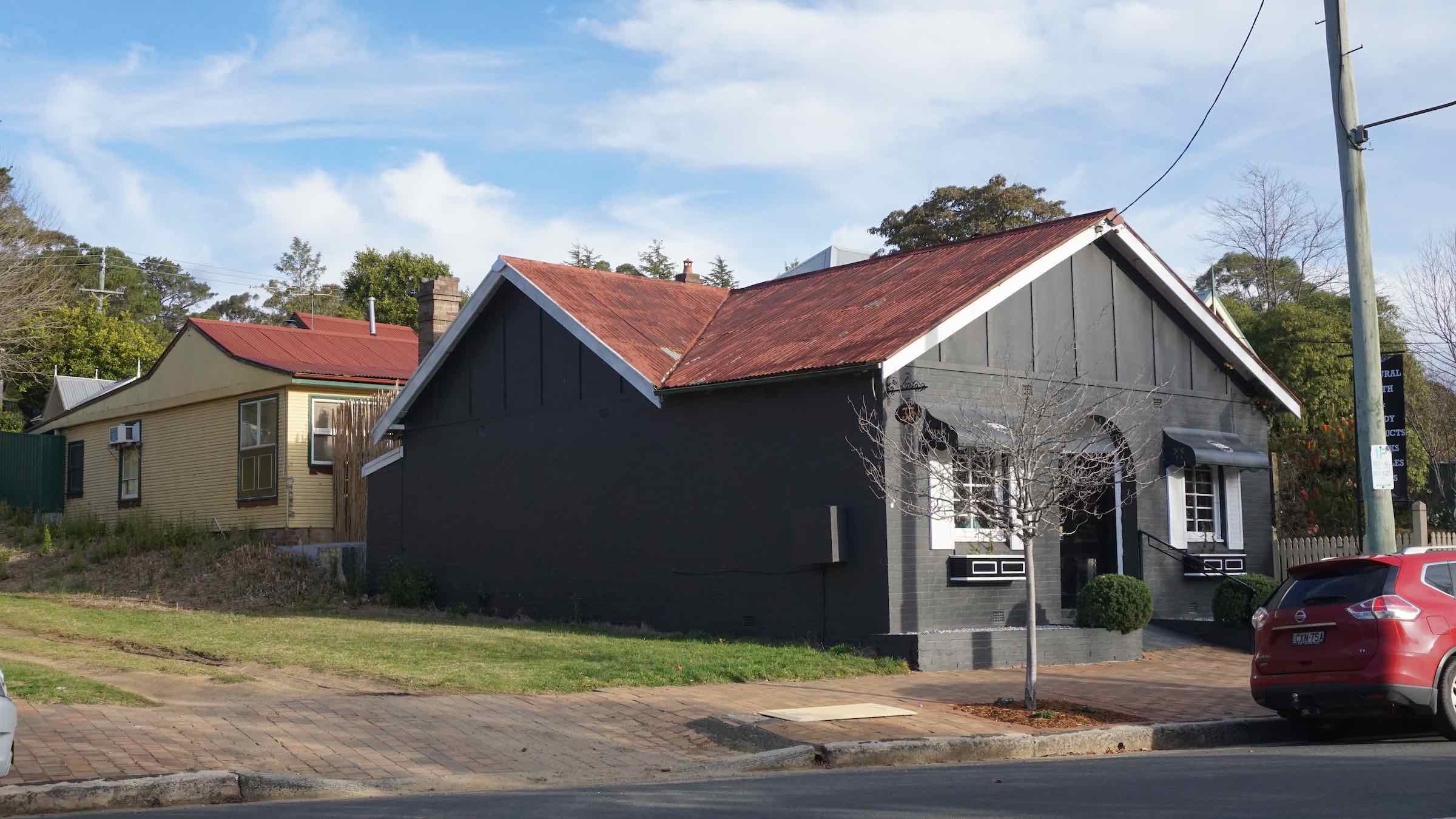 In 1970, the McNally family sold the property to Lawrence Taylor, Police Constable, and his wife Joan. In 1973, the Taylors sold to Kenneth John Hickling and his wife Wendy, who had also purchased adjacent lots. Mrs. Audrey Foster, wife of Ronald John Foster, Sergeant of Police,  purchased the shop on the corner of Church Street and Anzac Parade in about 1975 and moved the stock of bicycles from Railway Avenue around to there, and bike hire has since been conducted from there. For a short period in the late 1970s, this shop became a magic shop and was painted black.

”In the 1980s, ownership changed several times before the shop was purchased by Julian Woods and Rexine Garry who ran it as a business called the ‘General Store’.  Use changed for a short time to a supermarket, before a lease was obtained by Wendy Johnston and Robyne Toohey in May 1987 and continued to call it the ‘General Store’. They had previously run the Poppins restaurant in Railway Avenue.   Wendy and Robyne stocked a pantry with good things to eat and a gift and craft shop with an open fire. Visiting craftspeople would demonstrate their skills on Saturday mornings and ladies would come to choose their gifts whilst having a cup of tea. Wendy and Robyne terminated their lease in 1990. 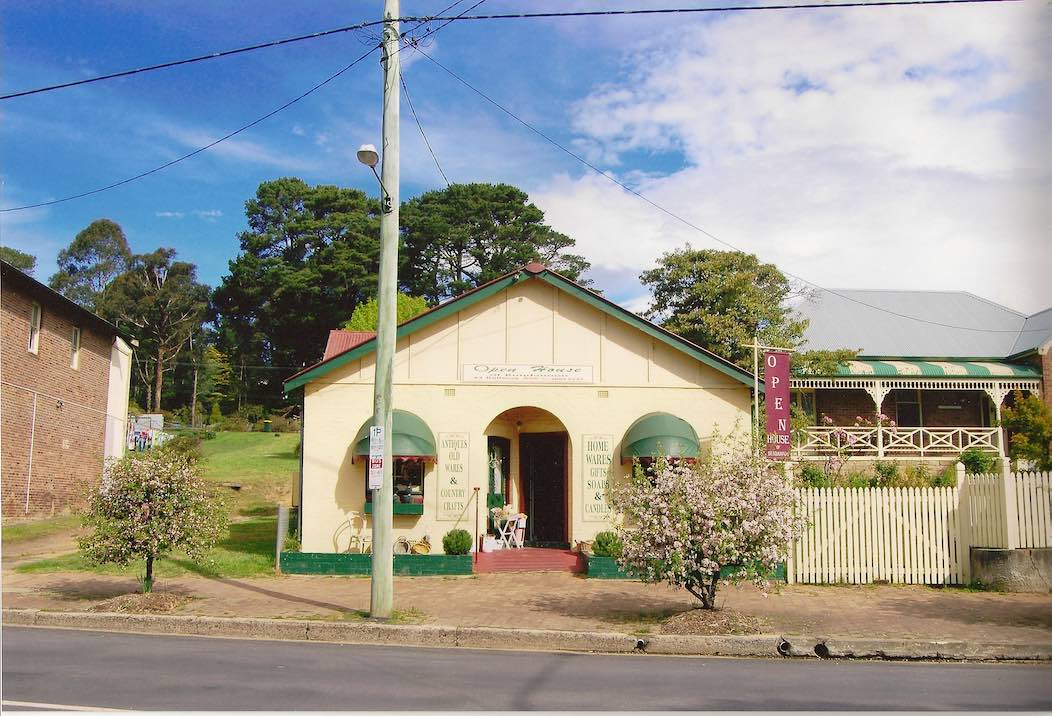